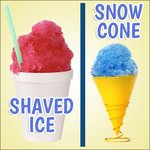 We are asked this question frequently. It often includes the terms Shave Ice (without the ‘D’), Shavers and SnoBalls. So why are there so many names and variations? Our answer is simple. It depends on the texture of ice and where you’re located.

The most common name for a cup of finely shaved ice is called, just that, Shaved Ice. Throughout the United States, you may also see shaved ice sold as Hawaiian Shaved Ice. This is the most popular name used. In New Orleans, a cup of shaved ice is referred to as a SnoBall or sometimes spelled Snow Ball. In eastern North Carolina, some people call them Shavers. In Hawaii, these cold treats loose a syllable by removing the ‘D’, calling it Shave Ice.

Shaved Ice is made of a fine, fresh snow that’s shaved with either a cubed ice shaver or a block ice shaver. Each serving is shaved-to-order and cannot be shaved in advance. The ice is never crunchy and is often served in various sizes of foam cups or flower cups. Shaved Ice vendors typically offer a wide variety of flavors - anywhere from 20 to more than 70. Toppings are a big hit with shaved ice lovers. Some people enjoy a sour twist on their ice by adding some sour spray.

No matter what you call a cup of shaved ice, people will usually agree upon a couple of things. First, shaved ice always consists of a smooth, fine ice, which holds syrup for each tasty bite. Second, Snow Cones are not the same as Shaved Ice.

A Snow Cone is probably the most common and recognizable term out of all the variations. However, Snow Cones are quite different when compared to Shaved Ice. Usually found at carnivals, ballparks and events, Snow Cones consist of a crunchy or coarse ice.

Snow Cones are made from using Snow Cone Machines which crush ice cubes (bagged ice) into small pellets. They are often served in 6 oz. snow cone cups. The ice is rounded to a dome-shape and when a syrup flavor is added, it often runs to the bottom of the cone making the last few bites the most delicious. Snow Cones are quick and easy to make because you may crush ice ahead of time and dip the ice into a cone as needed. Snow cone vendors typically limit the flavor choices, giving customers between 2 and 5 flavors to choose from.

So, what do you think? Are you on team Shaved Ice or team Snow Cone? 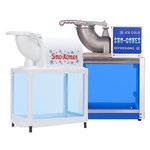